About us > Staff > Department of Metal Physics

Publications for the last 5 years 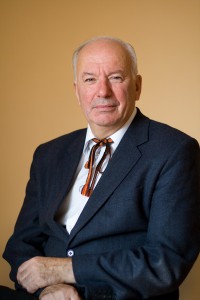 Ivan D. Shcherba was born in the Zymna Voda village of Lviv region, in 1950. He received the M.S. degree in physics from the Ivan Franko National University of Lviv, Ukraine, in 1972. Since 1976 he has been with the Department of Metal Physics of the Ivan Franko National University of Lviv, where he became a Professor in 2001. He received the Ph.D. and Dr. Sc. degrees in physics from the above university in 1981 and 1993, respectively. His current research interests are mainly in the field of the high-energy spectroscopy of metals and alloys. He has published over 165 papers in professional journals and three monographs. Professor Shcherba participated in 75 international scientific conferences in Austria, Belgium, Germany, Poland, USA, France and other countries.

Professor Shcherba is active supporter of the ethnical revival of the Lemkivshchyna (Poland) where from are his parents. He was the President of the World Federation of Ukrainian Lemko Unions (SFULO) in 2002-2007, the Chair of five SFULO Scientific Conferences and three Congresses. He is the author of over 50 publications on the Lemkos problematic. Professor Shcherba is the Member of the Shevchenko Scientific Society, Ukrainian Physical Society and Polish Synchrotron Society.

Member of the Pustomyty District Council of the two democratic congresses. For significant contribution to the strengthening of interethnic relations in Ukraine and abroad, for active participation in the development of a democratic society, for the preservation of the Lemko customs and traditions, Ivan Shcherba was awarded the distinction of the State Committee of Ukraine for Nationalities and Migration.