The study of physics at the University of Lviv took place from the beginning of its foundation in 1661. Initially, it was a part of the philosophy course according to Aristotle. The manuscript of the authors of the Lviv Jesuit Collegium Physica, sive scientia naturalis disputationibus illustrata in Leopoliensi S.I collegio was found in 1668.

The Chair of Physics was founded in 1784 after the opening of a secular university in Lviv, known as the Josephine’s (named after the Austrian Emperor Joseph II). It was led by Ignac Martinovics, who was also the first dean of the philosophy faculty. Martynovich conducted research on physics and chemistry, wrote a series of articles, dissertations, and also a two-volume textbook on physics Praelectiones Physica Experimentalis. After Martinovich, the chair of physics was led by Anton Gloisner, August Kunzek, Aleksander Zawadzki, Viktor Pierre, Wojciech Urbański and Alois Handl.

In the early 70’s of the XIX century the physics department was divided into two chairs: experimental physics, headed by Tomasz Stanecki, and the mathematical (theoretical) physics delivered by Oskar Fabian. Further experimental studies are related to the names of Ignacy Trzaska Zakrzewski, Roman Negrusz and Stanisław Loria. The Department of Theoretical Physics was headed for 13 years by Marian Smoluchowski, the prominent physicist, and his successors were Konstanty Zakrzewski, Stanislav Loriya, Szczepan Szczeniowski and Wojciech Rubinowicz. In the 1930s Leopold Infeld worked there, as well as Vasyl Milianchuk, the first post-war head of the Department of Theoretical Physics. 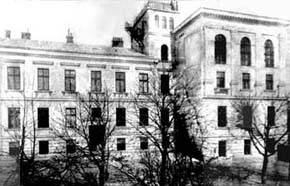 Educational building of the Faculty of Physics is in  Cyrila and Mefodia St., 8a.

The Faculty of Physics was founded in 1953 after the division of the Faculty of Physics and Mathematics of the University. There were 4 departments: theoretical physics, experimental physics, general physics and higher mathematics. Later, the Department of Solid State Physics, X-ray Physics, Semiconductor Physics and Dielectrics, Solid State Theory, Radiophysics, Nonlinear Optics, Radioelectronic Material Science, Condensed Matter Physics, Astrophysics, Electronics, Biomedical and Physical Electronics were opened. 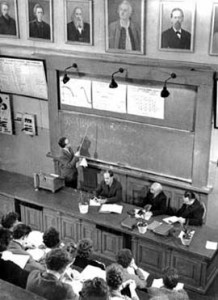 Scientific conferences are in the Great Physical Audience (1950s). They are led by M.T.Senkiv (left), S.P.Lytvynenko, V.N.Vishnevsky. 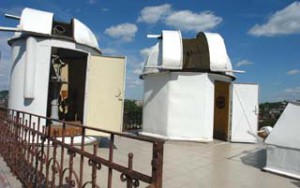 Pavilions with telescopes of the Astronomical Observatory are in the Cyrila and Mefodia St., 8.

The Faculty of Physics trains specialists in full-time education; Extramural studies were in 1953-6, evening form of studies in 1959-79. During the first years at the faculty there was only a specialty “physics”, since 1964 students had been trained in the field of “radiophysics and electronics”, and later – “optical devices and spectroscopy” and “applied physics”; nowadays – in the specialties: “physics”, “astronomy”, “physics of a condensed state”, “applied physics”. Since 1998 the faculty has moved to the multi-level system of training specialists, in 2002 the first issue of bachelors, 2003 – specialists and masters took place. Graduates of the faculty successfully work in production field, in research institutions and universities.

Celebration of the 10th anniversary of the of Physics faculty

Celebration of the 50th anniversary of the of Physics faculty

Celebration of the 60th anniversary of the of Physics faculty